How to use EBVs to evaluate a test mating

Pick the dogs you’re interested in, and use the EBVs for those two dogs to predict the EBV of the puppies. 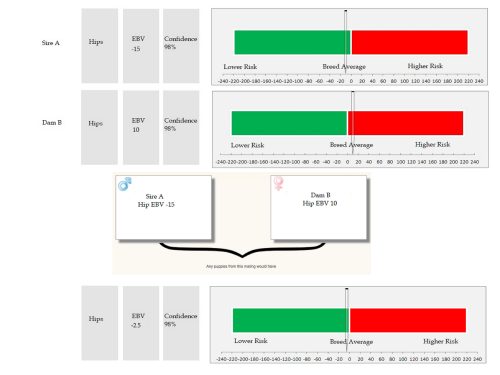 You can use EBVs for ANY trait you have information for. It’s being used for hips, elbows, heart defects, cataracts, cancer etc, anything that has a genetic component. It provides you with an estimate of heritability – the higher the heretiability, the easier it is to improve the trait through selective breeding. The current Golden Retriever databse has an heretibility of 60% for hips and 30% for elbows. A hereitibility of 60% would be a trait that will respond strongly to selection and a hereitbilty of 30% a trait that will respond moderatly.